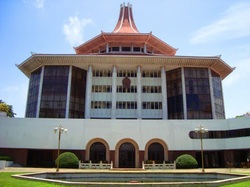 The Supreme Court of Sri Lanka is the highest court of Sri Lanka. It is the highest and final judicial instance of record and is empowered to exercise its powers, subject to the provisions of the Constitution. The Court has ultimate appellate jurisdiction  in constitutional matters, and take precedence over all lower Courts. The Sri Lankan judicial system is complex blend of both common-law and civil-law.

The topics are
1. State Sovereignty – with special emphasis on effect on sovereignty due to crimes committed in cyberspace. ( eg – Spying, Cyber warfare)

2. Non-Intervention, Right to Protect (R2P) and International Law – Delegates opinions on current occurrences which affected these concepts is vital (Russia's Intervention on the Crisis of Ukraine and the Israel-Palestine war.


All delegations will be required to make their statements regarding all three topics. The Committees will be conducted as rolling committees where each matter will be discussed for a period of 2 hours in each committee, and then move on to the next topic at hand. All delegates will therefore will be a part of all three discussions. However a country will get a limited number of opportunities to speak in one particular committee.

The Statement should Include

1. Identification of the problem at hand
2. The short comings of International Law with regard to addressing the issue at hand
3. Recommendations of the Delegate on how the body of law should be developed to properly address the issue.

Detailed description as to the debating format that will be adopted at ALSA Conference 2015 is given below. The debate will be held on the following topics.

1. This house regrets the emphasis on marriage equality in the gay rights movement

2. This house believes that, in the face of police repression, protesters have a right to non-lethal, but violent, proportional retaliation.

Debaters will be required to prepare for these topics. The topic on which your specific debate will be carried out will be decided randomly by us upon your arrival.